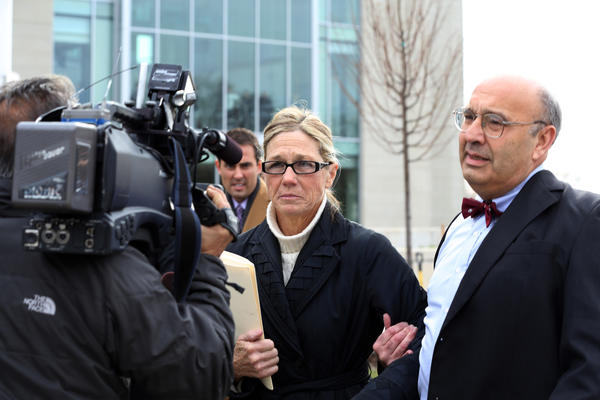 A former longtime treasurer of Dixon pleaded guilty today to fraud in federal court in Rockford for stealing $53 million from the coffers of the small northwestern Illinois city over two decades.

Rita Crundwell will remain free on her own recognizance until her sentencing on Feb. 14.

When asked her plea to the one count of wire fraud, Crundwell responded quietly, “Guilty.”

Crundwell admitted to stealing the $53 million since 1990 and using the money to finance her championship quarter-horse business and a lavish lifestyle.

As part of her guilty plea, she also admitted she engaged in illegal money laundering.

Under federal sentencing guidelines, prosecutors believe Crundwell faces up to 19 ½ years in prison, while Crundwell’s lawyers contend she faces no more than 15 ½ years.

Federal prosecutors had sought to have Crundwell taken into custody.

In arguing to keep her free pending sentencing, her attorney, Paul Gaziano said, “She’s worked hard with the government.”

But the 25-page plea agreement gave no indication that Crundwell was officially cooperating with federal authorities.

Crundwell still faces 60 fraud counts in Lee County criminal court. Gaziano said he did not know how those charges would be handled in light of Crundwell’s guilty plea on the lone federal count.

Since her arrest in April, Crundwell has agreed to the sale of her assets so that some of the lost money can be repaid to Dixon, bext known as the boyhood home of President Ronald Reagan.

So far, about $7.4 million has been raised by auctioning off about 400 quarter horses, a luxury motor home  and other equipment. Additional auctions are planned.

After court, Gaziano said that, with her guilty plea, Crundwell is “saving the government the burden and the expense of a lengthy trial.”

“Rita since the day of her arrest has worked with the government to accomplish the sale of her assets including her beloved horses all with the goal of hoping to recoup the losses for the city of Dixon,” Gaziano added as he wrapped his arm around Crundwell outside the courthouse. “I think the people of the city of Dixon ought to know that.”

Gaziano wouldn't take questions from a throng of reporters, and Crundwell had nothing to say before entering a black truck and being driven off.

At a press conference after the guilty plea, Acting U.S. Attorney Gary Shapiro, a veteran prosecutor in Chicago, called Crundwell’s embezzlement “one of the most significant  abuses of public trust I’ve ever seen in Illinois.” He also referred to Crundwell’s “incredible avarice.”

“If nothing else what we have in this case is an object lesson in how not to manage public funds,” he said. “This is a crime that never should have been allowed to occur.”

View all posts by: Joe Petrucelli